From PA to President: What I Learned From Hollywood About Leadership & Team Management 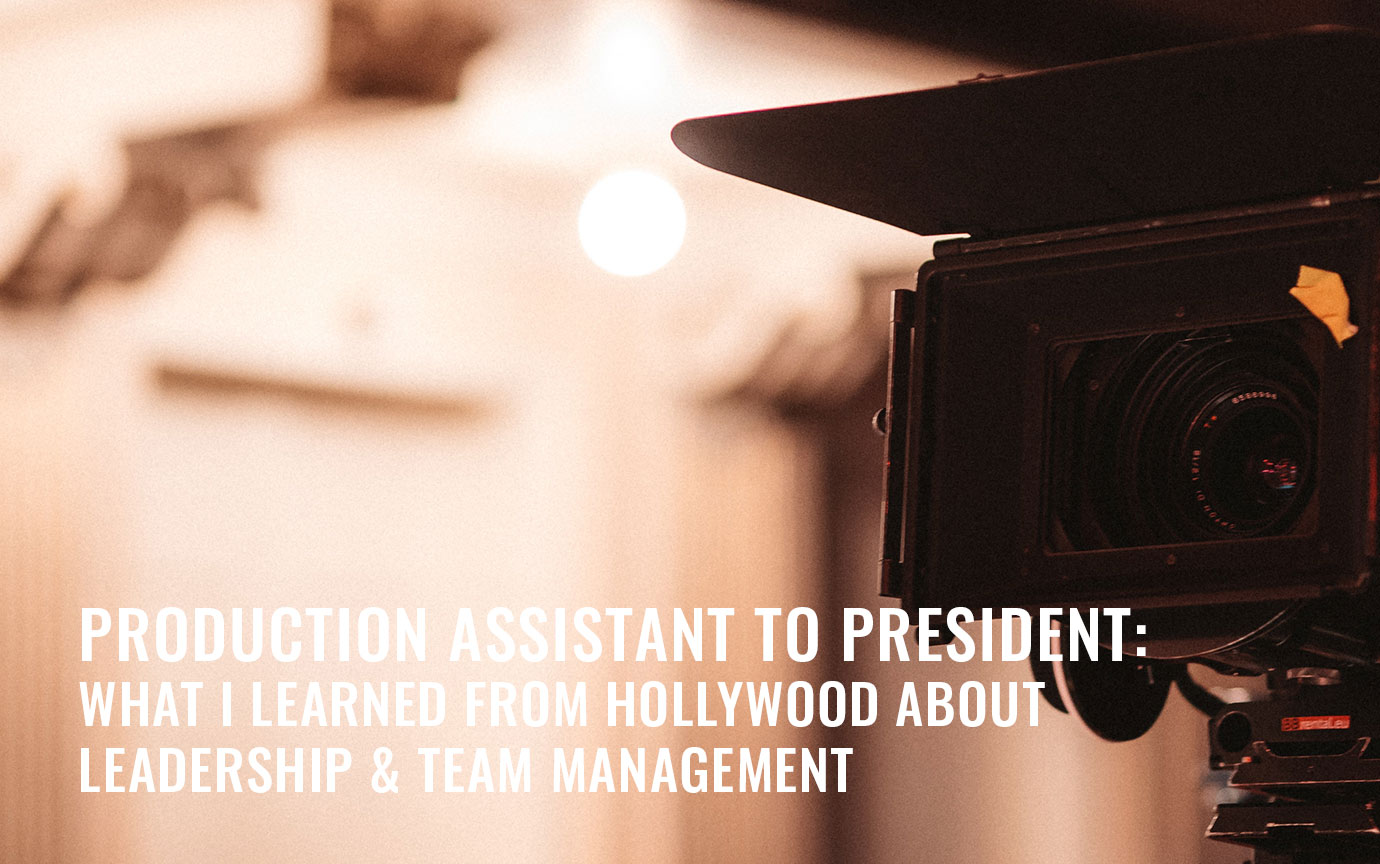 Years before we established Hepburn Creative, Inc., I worked as a Production Assistant on Hollywood tv shows filming in Hawaii. The film production network in Hawaii is a very tightly knit family. When I started, I had zero experience. Knowing someone who knew someone got me the interview. I will be forever grateful that they gave me the chance to learn valuable leadership principles on the job.

I had the great fortune of learning on the fly from the most amazing creatives in the world. Film sets have many departments; I worked for two. I was an Office Production Assistant, and a 2nd Unit Set Production Assistant. To oversimplify for the sake of this post, think of it as one team that keeps things running smoothly from home base, while the other is the one you see in the all the cool behind the scenes photos, working with actors out on location.

My teammates taught me how a successful film crew thrives. I’ve been able to apply these leadership principles to how our executive team manages our video production company here in San Diego today.

Anyone who hangs around a Hollywood film set for any amount of time realizes very quickly that whether you are a lowly production assistant, or top producer, everyone is putting in the same hours on set. For the most part, certain jobs don’t have earlier cut off times than others.

I’ll always remember my first 17 hour day as a Set PA. We were shooting the show’s season premiere episode and while the day was scheduled to be shorter, challenges appeared as the day wore on but everyone buckled down to get the shots we needed. From the dawn sunrise call time, to the director calling, “That’s a wrap!” well into the night, each crew member worked hard to carry out each setup and each scene. Just because someone was a director or producer didn’t mean they cut out early at the scheduled time.

The same is true for us at Hepburn Creative. Especially when we are shooting content internationally, long days are our normal. Companies that thrive see their executive leadership and employees working hard together. Each one has different duties of course. Often times wildly so. Unexpected challenges appear in any industry, and in our case as a video production company, on many of the projects we undertake. Successful teams have the energy, the camaraderie, and the healthy work environment to rise to the occasion and achieve the goal. When everyone hustles, it raises the morale of your team, and unlocks untold achievements and opportunities together.

Always be ready to leap into action.

One of the biggest expectations of a production assistant is to jump at a moment’s notice to accomplish any task requested. As the entry level team member, you know that you are learning on the fly. That means saying yes, every time. During my time as an office PA, my duties ranged from replacing paper in the copier (something that actually happens a LOT in a production office, since new script changes flow in daily), to delivering scripts to the cast, to making a run to any number of big box stores to replenish supplies, to sorting the new boxes of film that arrived every few days. The consistent thread in all of the jobs I was tasked was the expectation that accomplishing it should and did begin immediately.

Team members that activate quickly are valuable assets to the crew at your business. In a world where time is of the essence, your coworkers are counting on you to spring into action. As someone in leadership, encouraging this habit strengthens your team, and positions your company for success.

Surround yourself with a team ready to pivot.

It’s amazing to watch a seasoned film crew working together like a well-oiled machine. Each department has a chain of command of team members, and they all know every aspect of their job. Even when everyone knows their job and performs it flawlessly, unexpected challenges still appear. Rather than surrendering to potential roadblocks, the teams of filmmakers I worked with met these challenges with swift solutions.

In your business, are there ever times when a challenge arises unexpectedly? Of course! Practice flexibility, and encourage your team to do so too. Your team will respond positively when you demonstrate, as a leader, that you can be flexible. When this becomes a habit, issues that would otherwise be road blocking problems are easily overcome by a team that has no trouble pivoting.

Speaking of pivoting, one of the quickest ways to becoming an asset on a film crew is your ability to volunteer to solve problems. On my first job as a production assistant, we were forced to build an entire film studio from scratch. Literally from the ground up. At the time, Hawaii only had one film studio lot, and it was already in use by another show. Our production company had to rent an old warehouse that once belonged to a local stationery company, and convert it into a working studio lot.

As an office production assistant who had grown up on Oahu, I jumped at the opportunity to assist with the build out. This monumental task required multiple daily trips to stores all over the island to retrieve everything from office supplies to computer parts, to furniture. We needed everything, and I was someone who knew were to go to find what we needed. This job required anticipating needs and spotting problems I could solve.

At our video production company, this is invaluable to me now. I’m able to see problems, recognize solutions, and implement new processes that help us move forward successfully.

One of the highlights of working on a film set is sometimes working with well known actors. Even though it’s easy to get starstruck, at the end of the day, everyone’s just a person making their way through life. One of the most fun parts of my job was treating every conversation I had with an actor as just a conversation with a friend. It’s amazing what you learn from others when you treat each other as equals.

Who at your company or organization would you like to connect with? What’s stopping you? Overcome those perceived barriers and reach out to connect. Capitalize on those every day conversations you have. Connect organically, seize opportunities to learn new things, and grow connections and relationships.

I’m thankful today that co-founding a video production company wasn’t the first part of my professional journey. Long days on set all those years ago gave me opportunities to learn and grow, providing an incubator for skills I use in leadership today. Situations are different. Problems are unique. Thanks to my time on set, I approach challenges and circumstances today with tools and skills that I began honing in my early days as a production assistant.